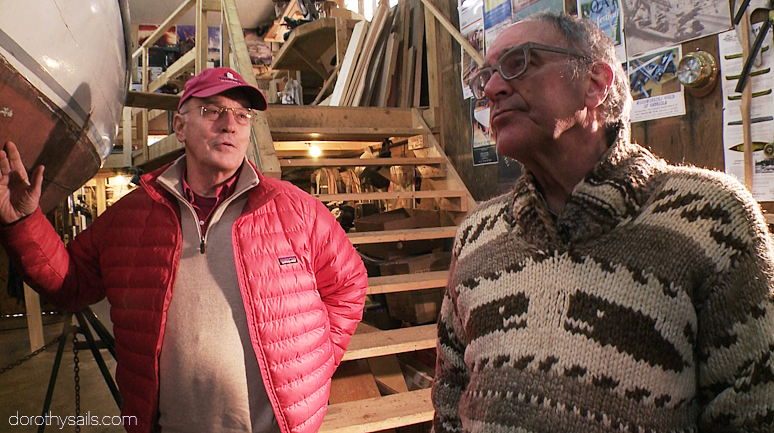 Between Wood and WaterCharactersMaritime Museum

What got her out of the shed and into the light: the story of two tenacious trustees

There is a story within Dorothy’s story that I’ve been waiting a very long time to tell, but you’re going to have to wait just a wee bit longer to get the whole shebang because… well, there’s a documentary in the works.

But I’ll give you a preview: it involves one of those critical points in Dorothy’s history – and there were many – when her future hung on the fine point of a balance that could have tipped either way.

At every juncture there was a person who had to decide either to continue investing in this boat, or to let the inevitable decline that was ever nipping at the heels of a wooden boat take over. We wouldn’t be having this conversation, and we probably wouldn’t even have any remnants of Dorothy today, if just one of those critical junctures had tipped with someone walking away from her. Dorothy would not exist today if it weren’t for the courageous men and women who stood between her and decay.

That’s what my documentary is about, after all. The men and women who stood between wood and water.

The most recent of those junctures happened in 2011. (And we’re at another juncture at this very moment, but I’ll get to that in the next edition.) And the particular heroes at this point of her story were John West and Eric Waal, who became trustees for the Maritime Museum of B.C. for the sole purpose of looking after Dorothy and the two other boats in their fleet, Trekka and Tilikum.

But as Kermit would say, it ain’t easy being green. And it’s even harder being a trustee for a very underfunded institution that was on the cusp of the fight for its life. However, as it always turns out in the story of Dorthy, luck was with her and it turned out that these two heroes had some things going for them.

Eric has the tenacity of a bulldog. And when he saw the Dorothy’s legacy fund being drained for storage and insurance fees instead of being put toward her repair, he wouldn’t let of the idea that the waste had to stop, and that Dorothy either had to be fixed and get back in the water, or be turned into a land-based display. His tenacity was the first domino that led to Dorothy being trucked to Tony Grove’s shop on Gabriola island.

Dorothy lucked out again when John came aboard, with his encyclopaedic knowledge of historical and classic boats, and copious amounts of charm and bonhomie. Beloved and well known in the boating community, John was one of the key founders of Victoria’s Classic Boat Festival, now entering its 40th year. Once he dug through the archives and logbooks and read the extensive documentation on Dorothy, he knew that this was a maritime treasure that had to be preserved for future generations.

And that’s why we’re having this discussion at all. When an elegant, beautiful example of turn-of-the-century craftsmanship was mouldering in a shed, these two men stuck their necks out and said that something had to be done. That she needed – no, deserved to be invested in, and they became her most recent champions and an indelible part of her story.

The men who appreciate ancient planks of cedar and fir and oak, and who understand the relationship of ships, wood, salt and water, are few and hard to find. So the fact that two of them found Dorothy when she needed them, well, that’s just another testament to the luck and loveliness of this little boat.

Here’s a quick snippet of discussion I cut from back in 2013 (when we were fundraising for production funds) of John and Eric discussing what tack should be taken in restoring Dorothy, with Tony Grove: Three Men and a Dorothy Baby.

Dorothy – and we – thank you, John and Eric.